Several years ago I devised this visual and fun way to teach and practise encoding and decoding Unicode. I used this method in my International Computing class. This method involves use of pencil and eraser.

The codepoints and the UTF-8 are all written in hexadecimal(hex). The binary bits are an intermediate form for the purposes of encoding and decoding. 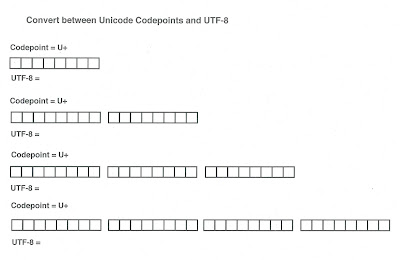 Encoding: We will start with encoding Unicode codepoints to UTF-8. 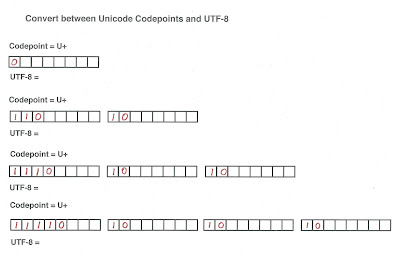 So, how do we determine where the codepoints go on the form. We need to look at the free bits to determine the range of values that can be accommodated. 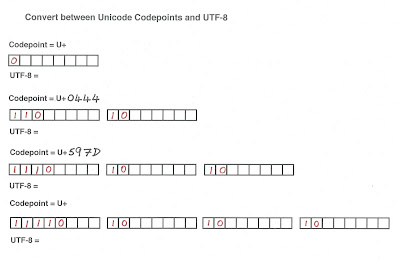 We have empty boxes into which we write the binary values of the codepoints. 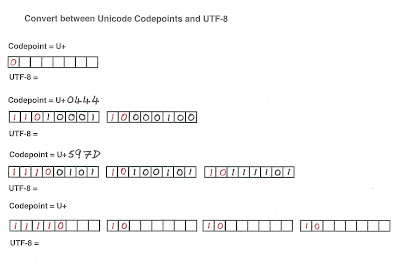 Finally, we take the complete bytes and write them as hexadecimal values to form the UTF-8 encoded forms. U+0444 encoded is D184, U+597D encoded is E5A5BD. 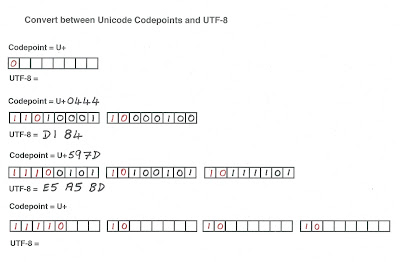 Decoding: Now onto decoding from UTF-8 to Unicode codepoints. We will decode the UTF-8 F0AA9FB7 which I have entered onto the form. I have used spaces on the form to make the byte boundaries more obvious. 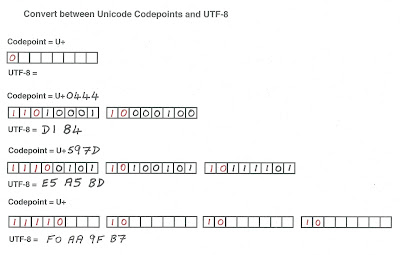 Complete the bytes by writing the binary variable values. 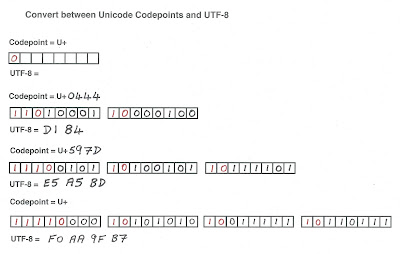 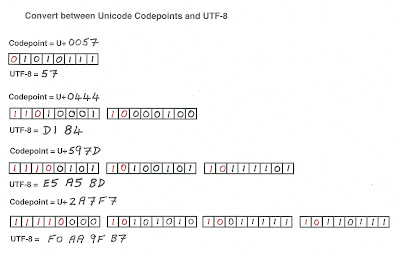 Whilst I was at it, I completed a single byte entry. The single byte characters are ASCII characters. ASCII is a subset of Unicode.

So, you have just written some Cool Code which will search for and find occurrences of specified text strings. You have access to Big Data text eg all the text in all public webpages. You will,of course, want to test your Cool Code. Letʼs perform some, seemingly, very simple tests.

Your Cool Code works fine as all I have done is applied some CSS styling, thus giving each of the two words differing appearance.

Now test you Cool Code with the following two words.

If you have only programmed for ASCII text then your now not so Cool Code will fail. These two words have differing appearance because they are not made up of the ASCII characters you are familiar with. These words use characters from the Unicode Math Alphanumeric Symbols block, U+1D400-1D4FF.

Should the Math Alphanumeric Symbols Scorpion be treated the same as the ASCII Scorpion wrt the search results of your code? In this context I think "Yes", most definitely. A person reading this blog, for example, will just perceive the word Scorpion whatever characters are used to write the word. The reader may well also visualise the insect with a "sting in the tail"😱

What of current working practice?

Google returns the same number of search results whichever of the above forms of Scorpion I use. At time of writing this is "About 144,000,000 results". I deduce Google is treating ASCII Scorpion and Unicode Math Alphanumeric Symbols 𝑆𝑐𝑜𝑟𝑝𝑖𝑜𝑛 & 𝐒𝐜𝐨𝐫𝐩𝐢𝐨𝐧 as equivalent.

I side with Google on this.

Here is a taster of what is happening in the behind the scenes technicalities of Unicode. Letʼs take just one of the Unicode Math Alphanumeric Symbols I have used, 𝐒 MATHEMATICAL BOLD CAPITAL S U+1D412. If you visit codepoints.net/U+1D412 you will see a wealth of information about this character. Of relevance to this blog is the Decomposition Mapping which is to the, oh so familiar, ASCII uppercase capital S. This Unicode information can be used to compute string equivalents which can then be used for search thus providing all relevant results.

The moral of this "Sting in the Tale" is: If you do not already know it, you must learn Unicode, it is essential.

Posted by André 小山 Schappo at Sunday, July 02, 2017 Links to this post