Recently, whilst using CentOS, I discovered that grep can highlight matched strings. The CentOS machine I used was setup with grep highlighting which is how I discovered it. I was impressed as it makes it clear exactly which text is matched.

My Mac OSX does not have grep highlighting with the default settings. I therefore decided to configure my OSX system so it does highlight grep matches as it is so useful. Rather than having to repeatedly type the relevant grep otions on the command line, I put them into my .bash_profile, as follows.

I now give a grep terminal session extract which illustrates non matching and matching.

The text used in this terminal session is Korean Hangeul. Each word is a Korean city, apart from 노팅엄 which is Nottingham, a city in England. The Korean cities are: 안산 Ansan, 안양 Anyang, 부산 Busan, 구미 Gumi, 제주 Jeju, 포항 Pohang and 양산 Yangsan.

Note: I use egrep as it is short form for grep -E which enables extended regular expressions.

Posted by André 小山 Schappo at Thursday, December 15, 2016 Links to this post

To keep up to date with Domain Name registrations I highly recommend gd-domains. It gives listings of newly registered Domain Names on a daily basis. Listings for individual TLDs (Top Level Domains) are available. It is thanks to this site that I discovered the below impressive and sizeable family of Korean Domain Names. They were registered on 11th and 22nd November 2016. The TLD used is 닷컴 which is Verisign's Korean equivalent to com.

Posted by André 小山 Schappo at Saturday, November 26, 2016 Links to this post

The following is a list of functioning Korean IDNs (Internationalized Domain Names). The TLD (Top Level Domain) used is 닷컴 which is Verisign's Korean language equivalent to their com TLD.

This family of Korean IDNs are concerned with Computer Repair 컴퓨터수리. The first two characters of the first 6 IDNs are names of Korean cities: 김포 Gimpo, 안양 Anyang, 용인 Yongin, 대구 Daegu, 파주 Paju, 성남 Seongnam. I think the first 2 characters of the next 2 IDNs are districts or neighbourhoods of 서울 Seoul: 용산 Yongsan, 종로 Jongno. The last one 일산 Ilsan, is a 동 neighbourhood of 고양 Goyang.

The following family of Korean IDNs all resolve to Fun Design website. I discovered this family at newly.domains/20171128-229 홈페이지제작 means home page creation. The first 2 Korean characters of the first 9 IDNs are Korean cities: 과천 Gwacheon, 광주 Gwangju, 대구 Daegu, 대전 Daejeon, 부산 Busan, 서울 Seoul, 수원 Suwon, 울산 Ulsan and 인천 Incheon. The last one, 분당 Bundang, I am less certain about. I think it is a district of 성남 Seongnam.

Posted by André 小山 Schappo at Wednesday, October 26, 2016 Links to this post

Scripts such as Latin are written from Left to Right (L➡︎R). Scripts such as Arabic and Hebrew are written Right to Left (L⬅︎R). What happens when we mix L➡︎R and L⬅︎R scripts within a document? Here is an exercise in mixing scripts.

Take a mixed bidi (bidirectional) string consisting of Latin and Hebrew characters in a L➡︎R paragraph.

...and here is the same string in a L⬅︎R paragraph.

Now to the actual exercise. Copy the above stings to your text editor or word processor. You will need to setup the 2nd occurrence of the string as a L⬅︎R paragraph. I am assuming that your directionality is L➡︎R by default. Each string has two boundaries where the text changes direction. For each boundary you are going to insert a character, either a L➡︎R, such as x, or a L⬅︎R, such as ד. For each insertion operation use the initial mixed bidi string. There are two mixed strings above and so there are a total of 8 insertion operations. The challenge is to predict where in the strings the inserted character will appear before you actually insert the character. Give it a go! Good luck😀

If I did this exercise before I ever studied bidi, I would probably have scored 4/8. Now I understand how the computer is processing this bidi text and so I usually score full marks for such exercises. It is though not an intuitive process for me as I have spent most of my life reading and writing L➡︎R scripts only. I have to think very carefully as to how the computer does it in order to determine the correct answers.

There are several permutations of this exercise, including:

Posted by André 小山 Schappo at Friday, October 07, 2016 Links to this post

I have been a long time practitioner and advocate of internationalising Computer Science teaching. My fundamental aim is to give students global computing skills. One such global skill, for example, is the processing of Unicode text rather than the very restricted ASCII text. Once one encompasses Unicode then one is encompassing most languages and scripts of the world.

Over the years I have tried to find other like minded Computer Science educators but have had no success. I had more or less concluded I am a solitary voice when it comes to Computer Science internationalisation. There does though appear to be some light as I recently discovered two organisations that promote internationalisation of teaching curricula.

 The Centre for Curriculum Internationalisation (CCI) which is based at Oxford Brookes University, UK. brookes.ac.uk/services/cci/index.html In addition to their website they have a google discussion group. I posted some information on my Computer Science Internationalisation initiatives and practices to this google forum. Please see groups.google.com/forum/#!topic/cicin/6XJCrqcdLD4

 Internationalisation of the Curriculum (IoC) in action which is based in Australia. ioc.global

Update 19th March 2017: I reached out to people and groups and I conclude I am still a solitary voice with respect to Computer Science Curricula Internationalization in UK Universities. I do believe UK Universities will have to embrace Computer Science Internationalization but I think it will be at least ten years before that happens. So, why do I persist? Am I wrong? Well, if I am wrong then so are, Google, Wikipedia, Facebook, Nivea, Booking.com, Nestlé, Hotels.com, Pampers, Intel, Microsoft, Philips, Adobe, Twitter and many many more companies. They all operate globally and are all producing software for the world. These global companies need graduates who have the skills and attitude necessary for building global software.
Note: I have taken these company names from The top 25 global websites from the 2017 Web Globalization Report Card globalbydesign.com/2017/02/16/the-top-25-global-websites-from-the-2017-web-globalization-report-card/

Update 1st October 2017:  I recently created an open forum specifically for discussion on the topic of Computer Science/ICT/IT curricula internationalisation. If this topic interests you, please become a member and join in the discussions. It is open to all. Please see groups.google.com/forum/m/#!forum/computer-science-curriculum-internationalization
Posted by André 小山 Schappo at Wednesday, September 21, 2016 Links to this post

The purpose of this post is to encourage all of you who are teaching Regular Expressions (RegExp) or are learning RegExp to think international. Think beyond ASCII. Thinking international means thinking Unicode instead of ASCII. Once one thinks Unicode then one is encompassing the world.

My RegExp teaching slides use ASCII only as a starting point. They then progress to Unicode. I give one of my slides as an example. 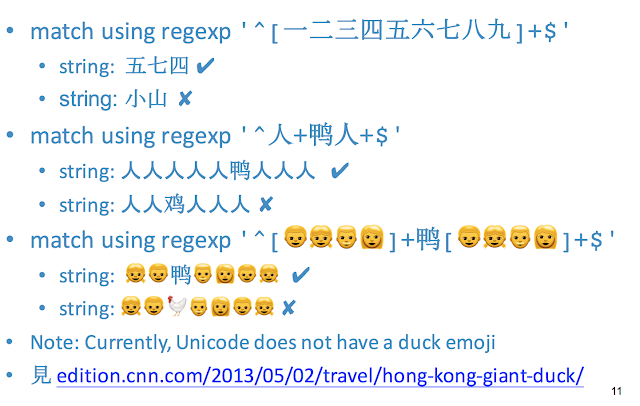 There is a lot of information packed into this one slide which needs some explanation. My example slide is using Unicode Chinese characters and Unicode Emoji characters.
This slide also contains a cultural reference. Some time ago I came across a Weibo 微博 post about the visit to Hong Kong by the big floating yellow duck http://edition.cnn.com/2013/05/02/travel/hong-kong-giant-duck/ The Weibo post had a photo containing many people looking at the duck. The text of the Weibo post was:-

When I saw this I thought it so funny and very clever. It just would not work in English but works so perfectly in Chinese. When writing my RegExp slides I remembered this Weibo post and thought this would make for an excellent cultural connection. Thus my slide is internationalized by using Unicode and incorporating a cultural reference. The use of Unicode is essential for internationalisation. Incorporating a cultural reference is optional but it does add an extra dimension that may well serve to make RegExp slides more interesting and encourage readers to explore the boundless potential of internationalized Regular Expressions.

Note: I have tried to find the Weibo post but have been unsuccessful so I cannot, unfortunately, provide a reference.
Posted by André 小山 Schappo at Thursday, August 25, 2016 Links to this post

Most human language scripts are written from Left to Right (L➡︎R). Arabic is written Right to Left (L⬅︎R). An email address written in the Latin script would be displayed L➡︎R — username@domain-name. An Arabic email address, on the other hand, would normally and without intervention be displayed L⬅︎R as domain-name@username.

Your browser should be displaying the email address خالد@الدوحة.قطر in L⬅︎R order which is not an order familiar to most L➡︎R readers and so requires some effort to parse.

When text has mixed L➡︎R and L⬅︎R characters it is referred to as Bidirectional (bidi) text. There is a complex Unicode algorithm specifically to determine  display order of bidi text unicode.org/reports/tr9/ If you read this report you will see something called Directional Isolates.

In the html world there are tags and attributes specific to bidi. One such tag is <bdi> which is bidi isolate. Using such html bidi isolation one can incorporate Arabic email addresses that are natural to read for both L➡︎R and L⬅︎R readers. These addresses can be written such that their overall text direction adheres to the text direction of the context. This context may be the direction of the whole html document or some subpart such as a paragraph.

First we will setup our html with a L➡︎R context for L➡︎R readers. The below paragraph (p) is setup with dir (direction) to ltr (left to right). The email address has 3 components: username, 2nd level domain name and TLD. Each component is direction isolated. This gives an email address whose overall direction is L➡︎R. The text of each component is, as it should be, L⬅︎R. I posit that this is much easier for a L➡︎R reader to comprehend. It is now obvious, for instance, to determine which is the username and which is the TLD.

But how will the address be displayed if the context is changed to rtl (right to left). The code correctly displays the whole address in L⬅︎R order, both overall direction and text direction of each component. Thus we have also catered for L⬅︎R readers without changing relevant address display html code.

Just in case your browser cannot, as yet, handle bidi isolates here are the 2 contexts in image format.

Posted by André 小山 Schappo at Sunday, March 13, 2016 Links to this post

Here is a method for typing Emoji by name but not by English name. This method is for writing Emoji by Chinese name. OSX provides a Pinyin Input Method for writing Chinese. Pinyin is a romanization of Chinese. When writing in pinyin a candidate window pops up which lists all possible Chinese characters 汉字 and Emoji.

Here is a small sample of the Emoji which can be typed using this Pinyin Input Method. Each line below starts with the pinyin followed by the Emoji. The pinyin can have multiple meanings, multiple candidate Chinese characters and hence multiple Emoji. Hopefully for the examples I have given below you will be able to work out the meanings from the Emoji. Some of the below pinyin represent objects and some represent emotions.

Posted by André 小山 Schappo at Friday, January 01, 2016 Links to this post